The Magazine of the ISB (International Society of Bassists)

“This CD by Brussels-based Duo Sweet 17 is a real delight. Viola d’Amore and Viennese Bass is perhaps at first glance an unlikely combination, but a quick listen to any of these tracks or a glimpse of the duo from any number of its YouTube videos will confirm that this instrumental collaboration is very special indeed.

Duo Sweet 17 is bassist Korneel Le Compte and his chamber music partner Haruko Tanabe. They are both established and respected performers in Europe, and as a duo and with their Ensemble Per Questa Bella Mano have presented many fascinating concert programs.

The repertoire they have recorded for this recording include three sonatas, two by Ariosti and one by Sperger. Attilio Ariosti was a colorful musical personality, a monk, cleric, composer, multi-instrumental performer, diplomat and impressario whose career took him from his native Bologna to Venice, Berlin, Paris and London. The 21 so-called Stockholm Sonatas, which he wrote for his favorite instrument, the Viola d’Amore, are better known today than any of his operas, cantatas or oratorios, and, other than Thomas Georgi’s recordings for the BIS label, are rather poorly represented on disc.

Ariosti’s music is often described with some of the same qualities as Sperger’s and the quite remarkable blending of the two instruments used here is never more sensational than tracks like the second Adagio from the Sonata No 12. The choice of two sonatas in minor keys is unusual and lends a greater range of color character to the disc.

The Sperger Sonata recorded here (known as either T37 from Klaus Trumpf’s catalogue or as the “Duetto per il Contrabasso et Viola” from the manuscript) is much more a duo than the other two sonatas, and the reading here is both eloquent, elegant and full of the esprit and repartee of the composer and is, I believe, the first recording of this work on Viennese bass.

The recordings are clear, warm and detailed and every nuance of their interpretation is audible. As viewed in photos and videos, Korneel and Haruko are clearly enjoying playing together and this CD captures much of the wit, inventiveness and buoyancy of this music.

It’s wonderful to hear the Viola d’Amore in such a setting, even though with its frequent scordatura and sympathetic strings, it is heard somewhat more regularly today in the St. John’s Passion, some Janacek and Haendel opera’s, and in the hand of various champions. The Ariosti sonatas even rate a mention in Thomas Mann’s “Dr. Faustus”.

The Viennese bass is enjoying a much-deserved revival, and thanks to performers of the stature of Le Compte and recordings like this, its popularity should soar even further.”

“Although this listing already contains a number of high quality recordings demonstrating top levels of artistry and virtuosity, I was particularly happy to review this CD, as it brings this rare feel of chamber intimacy through very clean, yet also very musical playing – a feat that is often most difficult to achieve.

This recording is also unique in the sense that all pieces are period, yet rearranged in some way to mimic the period style. The two Ariosti sonatas were most likely not composed for the Viennese bass, and the Sperger sonata (originally intended for Viennese bass) does not feature Viola d’Amore in the original. Yet, the overall effect is very honest, enlightening and pleasing – in the aesthetic way that I envision would have been truly enjoyed in the 18th century.

The venue that produced the CD is called “Rough Records”, implying that the straight recording takes that keep the spirit of the interpretation are preferred to those full of computer edits, that are all too common in modern productions. Yet I believe a better term would be “Nice Records” as the effect is anything but “rough”. Moreover, the overall production and sound quality are so good that I would openly recommend this recording to the general music public in need of relaxed listening – the exact type for which the featured compositions were conceived at the period.

This CD is perfectly suitable for all commercial broadcasts, but also for playing in public spaces where some calm may be desired. To conclude, this is an excellent recording featuring a very transparent sound of both instruments at its best. Viola d’Amore color may on occasion be perceived as even brighter of the regular viola, and the bass in Ariosti appears to have been played often in the 8 foot range that can not overpower the viola d’amore timbre. Korneel and Haruko play superbly here, and not only to satisfy some imaginary “period” standard, but for us today to enjoy. Bravo and Congratulations!”

DVD “FROM BRUSSELS WITH LOVE” by Ensemble Per Questa Bella Mano

“This unique DVD deserves every praise from the author of this portal for its unique conception and featured material. Korneel Le Compte is one of the rare multifaceted bassists who stands firmly both in the modern orchestra bass field – as the principal bass of the La Monnaie Opera in Brussels – and the forefront of the period performance scene as the soloist pioneer in the Viennese Bass field.

Yet all these qualifications are surpassed with this DVD where we also witness his ability to produce a top level documentary DVD featuring both the scholarly discussion of the modern period practice, and the Viennese Bass field – which is ilustrated with the top level performances of some of the most difficult and representative pieces from the repertoire.

Featured on this DVD is a cross-section of the repertoire performed with Korneel’s ensembles Duo Sweet 17 and Ensemble PQBM from their recent concert activity – and commented with all the details one would wish to hear and see when studying the Viennese bass technique and period musical interpretation.

How much effort and personal sacrifice was spent to prepare, record and assemble this lovely DVD package is probably known only to the authors of this DVD themselves. Bravo indeed and best wishes on any future projects too!”

But I especially enjoyed an afternoon “Concertino” put on by La Monnaie, Brussels’ grand opera house for 8 euros, a fraction of what you’d pay for performances in the elegant 19th-century hall. The Ensemble Per Questa Bella Mano, as they called themselves, played 18th-century pieces on period instruments, including a viola d’amore and Viennese bass. The performance of the group’s namesake piece “Per Questa Bella Mano,” written by Mozart, which the program (trilingual, of course) explained had long been considered “unplayable” and “unworthy” of the composer. Then someone realized it had been meant for the Viennese bass, not its modern descendant, and the piece was reborn. A nice twist, and after all the genre-bending craziness I had witnessed before it, refreshingly quaint.‏ 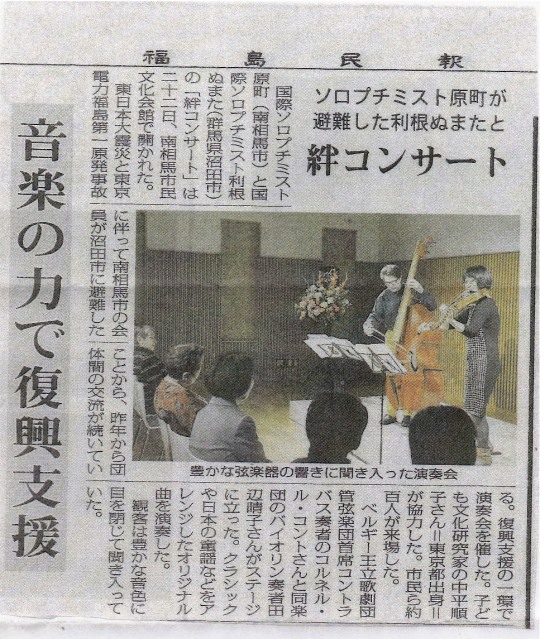